This article is an extension of an article that I posted a few days ago. The idea that I want to discuss is the one below:

For the purpose of explaining the failures in the previous idea, I will assume a very simple model of obesity: we gain 3 g of body weight for every 100 g of sugar consumed. Please, don’t bother to criticize this model: I will only use it as a tool to explain the errors in the idea explained above. What we will see is that, under the premise that sugar is determining our body weight gain, the correlation between sugar intake and body weight may be low. That is the main conclusion and the specific model used for the explanations is irrelevant.

As said above, our assumption is that we fatten 3 g for every 100 g of sugar consumed. If our intake of sugar were 50 g, we would fatten half that amount: 1.5 g.

Given a specific sugar intake, the DAILY increase in body weight will be directly related to that DAILY sugar intake.

Let’s say that over the years our DAILY sugar intake has changed according to the blue curve in the graph below. In this scenario, our DAILY body weight gain would change as indicated by the red curve (calculated according to the hypothesis of that we fatten 3g per each 100 g of sugar consumed).

DAILY sugar intake and DAILY body weight gain are directly related variables. Their correlation, i.e. the mathematically-computed resemblance between them, is maximum. 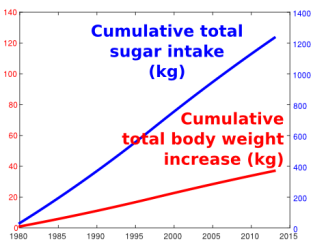 We know that the red curve is completely determined by the blue curve, but they don’t have a good correlation. Or in other words, we confirm that a low correlation tell us nothing about the existence of a dependence relationship between two variables. If for the same situation, we had chosen the two previous graphs, we would have concluded that the relationship between sugar intake and body weight gain is undeniable.

If we recall the idea at the beginning of the article, A (blue curve) has changed, and the effect on B (red curve) is apparently small, but we know for a fact that A completely determines B.

What are we seeing?

In the last graph I presented above, the red curve is completely determined by the blue curve and the correlation between them is low. How is that possible? Because these two variables, while they are completely related, they don’t have a direct relationship. One variable is the CUMULATIVE TOTAL body weight gain, the effect of several years of fattening, while the other variable is just the DAILY sugar intake for one of those years. The fact that one of them goes on rising, albeit more slowly, when the other one decreases DOES NOT suggest that a cause-effect relationship between them is unlikely. The CUMULATIVE TOTAL body weight gain is not supposed to go down when the DAILY sugar intake is reduced: a «negative consumption of sugar» would be needed to produce such an effect on body weight. And, in any case, it would be the level, i.e. the fact that sugar intake is negative, what would produce a decrease in the  CUMULATIVE TOTAL body weight gain, not the change, i.e. the fact that sugar intake decreases. Even if it were possible to consume negative amounts of sugar, neither there would be a direct relationship between both variables nor a high correlation would be expected.

We have seen in this article, with help from a simple model of obesity, that although CUMULATIVE TOTAL body weight gain and DAILY sugar intake are not well correlated, that doesn’t suggest that there isn’t a causal relationship between both variables.

On the other hand, Guyenet confuses a lower intake of sugar with a negative consumption of sugar. Logic says that if sugar is fattening, reducing its consumption doesn’t make us slim down.