A couple of scientific studies about saturated fats.

A study from 1998: “Effects of Reducing Dietary Saturated Fatty Acids on Plasma Lipids and Lipoproteins in Healthy Subjects”

The graph shows the content of total fat and saturated fat in the three diets: 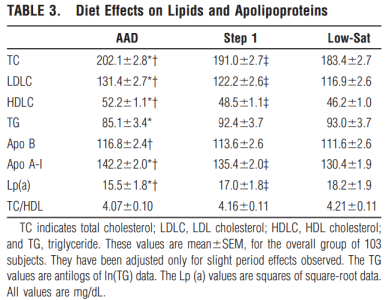 Total cholesterol aand LDL levels were reduced, but at the expense of a lower HDL and an increase in the concentration of Lp (a), a subfraction of LDL believed to be atherogenic and associated with cardiovascular disease (see). Some bargain we got there!

Surprisingly, plasma Lp(a) concentrations increased in a stepwise fashion as SFA was reduced

There is no physiological mechanism that allows us to accuse saturated fat of being bad for our health (see, see). It is accused using just statistics: they tell us saturated fat worsens the cardiovascular risk markers. But we just saw it isn’t true: more saturated fat and less carbohydrates improves cardiovascular risk markers. Is it caused by having fewer carbohydrates or by having more saturated fat? Hard to know, but in any case the conclusion is the exactly same: it is a good idea to eat foods of animal origin (unprocessed, I would add) with their natural fat, instead of grains, flour, sugar, etc..

This one was published very recently and tells us just the opposite of the one before, that saturated fat increases the risk that you die of a heart attack (more or less it says that).

How is it possible that this second study says just the opposite of what we just saw?

Imagine that we have three scientific studies:

But the deceit is even more blatant if we know that we they found no association between a higher intake of saturated fat and higher all-cause mortality. But they don’t highlight that outcome, the most important one. They insist once and again that, apparently, you die less from one particular cause. That’s great!

That is roughly the BS that the Cochrane Collaboration has created, with the frightening result that reducing your dietary saturated fat lowers your risk ratio of death to 0.97. That means there is no effect on mortality from reducing the saturated fat in the diet.

The review found that cutting down on saturated fat led to a 17% reduction in the risk of cardiovascular disease (including heart disease and strokes), but no effects on the risk of dying.

But it really doesn’t matter what are the conclusions of the meta-analysis. We can never trust a meta-analysis. You should always check the details of the studies included in a review, trying to find out if the results are the result of reducing saturated fat in the diet, or they could be caused by any other aspect of the dietary intervention. For example, in one study may eat less saturated fat, but also less trans fat and less sugar and refined carbohydrates. Putting together in a meta-analysis several multifactorial interventions and blaming all the result of the intervention to the saturated fat in the diet is dishonest. It is worth reading an article written by Andres where he checks out the articles included in the meta-analysis.

Added to all the serious problems with the data included in this meta-analysis, in its conclusions they highlight the fact that there is a correlation between less saturated fat and fewer deaths from a specific condition, cardiovascular disease, instead of concluding that mortality didn’t change. It seems irrelevant to me the cause of death, if mortality is the same. But I insist, what really matters is that in the studies included in the review, a reduction in saturated fat intake was not the only change made in the intervention group. My conclusion is that the Cochrane Collaboration has just discredited itself.