Stephan Guyenet, PhD has written a book titled «The Hungry Brain: Outsmarting the Instincts That Make Us Overeat «. Just having a look at its cover makes it clear that nothing interesting can be expected from inside the book, as this guy is trying to answer a wrong question: he assumes that the cause of obesity is that we overeat.

A couple of excerpts from the book:

Three independent methods suggest that our calorie intake increased substantially over the course of the obesity epidemic, and this increase is sufficient to account for the weight we gained. Simply stated, we gained weight because we ate more.

When you eat more calories than you burn, the excess calories are primarily shunted into your adipose tissue. Your adiposity, or body fatness, increases. It really is as simple as that

When calorie expenditure decreases and calorie intake increases, the energy balance equation leaves only one possible outcome: fat gain. We gained fat as we ate more calories than we needed to remain lean, given our physical activity level. In other words, we overate.

Two sentences from Guyenet’s book are perfect as an illustration of how the energy balance pseudoscience is built:

When you eat more calories than you burn, the excess calories are primarily shunted into your adipose tissue. Your adiposity, or body fatness, increases. It really is as simple as that

Is actually that the way our body works? First our body uses the energy it needs, and then what’s left is stored as body fat? Is that what our knowledge of the human body’s physiology says that happens? I’d like to see the scientific evidence that supports Guyenet’s claims, because I think it is absolutely UNTRUE that our body works the way he declares. Guyenet’s ideas are not science, they are quackery.

What are the tricks here?

Moreover, the data that Guyenet is using is epidemiological, i.e. statistical data from a population. These data aren’t from a controlled experiment’s output. In this case, not even the caloric intake is necessarily an input, a cause: a priori it is only an effect, an observed symptom. Nobody here has carried out a controlled experiment in which the caloric intake has been increased: we are observing that the caloric intake has increased in the last decades, because of an unknown cause. There is no rational basis supporting Guyenet’s claims, which are the idea that two of the terms of the energy balance equation have changed and then, as a consequence, the third one has been forced to change.

An inappropriate food composition (i.e. the presence of sugars, grain flours, added chemicals, etc.) could have simultaneously induced fat accumulation —-per se, independently of the calories consumed—, an increase in the caloric intake (which in turn aggravates the body fat accumulation) and a reduction of the physical activity levels. The laws of thermodynamics can’t say what is cause and what is effect, nor do they impose a relevant role for energy, neither as a cause nor as a solution to the problem of obesity. The idea that «calories count» is not derived from the thermodynamics laws, and therefore it needs to be proved. I believe it is really significative that when evidence is presented to defend this theory, it is always false.

Although I have written repeatedly about all these sophisms, there is one of them that I consider critical:

from a tautology (i.e. saying the same in a different way) it is inferred that gaining or losing weight are energy balance issues, and that talking about calories is unavoidable.

«If you eat more calories than you burn, you will gain weight»

The best way to explain the deception is, probably, to apply the same reasoning to a different tissue, e.g. muscle mass:

the laws of physics tell us that muscle mass can’t get bigger unless you eat more than you spend, so the increase in muscle mass happens as a result of a caloric intake that is excessive for your energy needs

You know it is wrong. You know that there is a «trick» in the reasoning. You know that the laws of physics don’t say that the muscle mass increases because you eat too much and move too little, and nobody can convince you of that, no matter how skilled they are playing with words. You understand that, when talking about the muscle tissue, it is absolutely stupid to use the energy balance theory to infer the cause of the growth. Once you realize that facts, nobody will ever convince you that using the laws of physics is a must when talking about the adipose tissue.

If you consume more calories than you burn, will your muscles grow?

What is wrong with the above sentence? This is not a rhetorical question: it is an important one. Can you explain the fallacy?

The carrot, the stick and the string

In one of my favourite blog posts, «Lose the weight following the advice from the experts«, I use the analogy of a man attached to a carrot by means of a stick and a string (see image below). What I try to to illustrate with the analogy is how solutions for a problem derived from inviolable laws of physics, can be undeniably stupid. As we will see next, a key in the fallacy is assuming a value for a parameter that is not actually under our control. 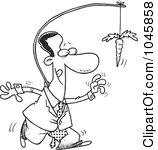 Referred to the picture above, are the following statements true or false?

If you run faster than the carrot, you’ll reach it.

If you run slower than the carrot, it will eventually disappear from your sight.

Reaching the carrot is about managing your speed relative to the carrot’s speed. Creating a speed surplus is the way to reach it, while a speed deficit will make it move away from you.

Disassembling the stick that links you to the carrot is useless, because unless your speed is greater that the carrot’s you won’t reach it.

Are you still not persuaded that speed is the key to solve the problem?

all you need is to know is the carrot’s speed and then move faster than it. Let’s say that the carrot is moving at 1 km/h. In this case, you only need to move a little faster, for example at 2 km/h, and I can guarantee that you’ll reach the carrot. It really is as simple as that.

Do you disagree with this? May be you think that it is possible to reach the carrot without being faster than it is? I’m sorry to break this to you, but that would violate the laws of physics and you can’t do that.

Is it true that if you run faster than the carrot you’re going to catch it? Yes, it is, but it is a sophism , because this solution is only correct in appearance, since it is unrelated to the specifics of the problem. Any reference made to the carrot’s speed should be making clear that this magnitude is an observed output, instead of giving the impression that it is an input with a specific value or that we can force a positive or negative difference relative to another parameter.

According to logic, what is the relationship between the man’s speed and his distance to the carrot? Does logic say that managing his speed is the way to reduce that distance? Do the laws of physics tell us that any solution that works does so simply because it helps us increase our speed?

If the laws of physics say always exactly the same thing, whether there is or there isn’t a stick that links you to the carrot, can these laws be useful in any way to solve the problem?

The laws of thermodynamics are exactly the same regardless of the physiological mechanism used by an adipocyte to grow! What on earth made us believe that these laws can be useful for understanding or curing obesity? Nobody uses them with any other growth of a tissue. Isn’t that fishy?

We are nothing else than arrogant morons. If we ask a child for help on how to reach the carrot, he/she will not say that you have to create a speed surplus. Moreover, the «speed» concept won’t even cross his/her mind. And he/she will solve the problem. The fact that a law of physics is inviolable, doesn’t mean that that law is necessary, nor useful nor relevant to solve a problem. In my opinion, the people that defend the use of the laws of thermodynamics in nutrition are themselves the problem and will never be the part of the solution.

Did we gain weight because we consumed more calories than we expended? Can you tell now how, from a tautology that tells us nothing useful, has the energy balance pseudoscience been built?