I’m going over some aspects of The Minnesota Starvation Study, an experiment that has been commented previously in this blog (see,see,see).

The objective of the experiment was to study the recovery phase from a malnutrition condition. In order to do so, first weight loss was induced by caloric restriction and physical exercise. The duration of this first phase was 6 months. After those 6 months, the researchers tested different options in the weight recovery phase.

According to the researchers, the rate of weight loss in the first phase approached zero after 24 weeks (see):

Mathematically, the general curve required for weight versus time is represented by a parabola with vertical axis and zero slope at 24 weeks.

Note that the researchers tell us that the body weight evolved in such a way that at week #24 there was no weight loss: «zero change», «zero slope».

In the picture below we can see the evolution of the body weight of the participants (white dots) and the energy intake during that period (black dots):

The important fact here is the participants always followed a hypocaloric diet and they stopped losing weight. They went from consuming 3150 kcal/day at the baseline to consuming about 1750 kcal/day. Taking into account only the energy intake, they applied a caloric restriction of around 1400 kcal/day:

It must be noted that the present subjects changed from a control average of 3150 Cal. to a semi-starvation average of 1755 Cal.; this represents a potential deficit of 1395 Cal. per day.

In short, they are living in a facility, their intake is absolutely controlled, they are eating much fewer calories than they used to, and they are also doing physical exercise (therefore, their enegy expenditure is supposed to be high) (see),

As I said above, the official goal of the experiment was to analyse the best way to recover from a malnutrition condition. From 6 months (time point S24 in the graph below) onwards, the energy intake was gradually increased. At time point R12, although the participants always had consumed less calories than they used to (red lines in the picture remained always below 100%), they had already recovered almost all the body fat (point marked with arrows on the solid curve) that they had previously lost. 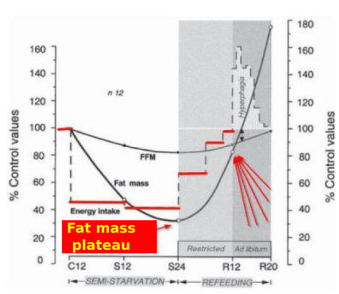 When you are «eating less and moving more», but you reach a plateau, your options are: keep on following the diet and slowly regain the previously lost weight, or you can start consuming a normal amount of food and you will regain the lost weight faster.