When you eat more calories than you burn, the excess calories are primarily shunted into your adipose tissue. Your adiposity, or body fatness, increases. It really is as simple as that (Stephan Guyenet, PhD)

No, it is not as simple as that. As a matter of fact, that idea is a perfect example of the energy balance pseudoscience. The laws of physics do not tell you how things work, but rather the constraints under which they work. Whatever happens in a system, its behaviour cannot violate nature laws: matter cannot be created from nothing, an object will not accelerate unless a net force is applied or energy can not be created nor destroyed. Nevertheless, those limitations are often irrelevant in practice. For example, according to the Law of Conservation of Matter, you cannot accumulate matter in your body unless more matter enters the body than exits. But that fact is irrelevant for understanding growths in a living being.

What I want to explain in this blog entry is that the fraud in the energy balance theory does not lie in the maths —since this theory is indeed compatible with the physics constraint imposed by The First Law of Thermodynamics—, but in the physiologic behaviour that this theory makes up by using language tricks.

I am going to use a water tank as an analogy. Water is poured regularly into the tank and part of its contents is lost through a drain. We know that water cannot accumulate in the tank unless more water comes in than is lost through the drain. That is a true as useless, because it is just saying accumulation with different words. But, do you think that when more water comes in than goes out, the excess water is accumulated in the tank?

I am going to present two simple models based on a water tank. Both of them are compatible with the physics laws, since water is not created nor destroyed in any of them, but they behave differently. I insist: my point is that the energy balance theory is a fraud not because of its maths but because it makes up a physiologic behaviour. 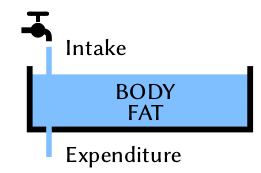 Let us assume, for example, the following behaviour of the drain: the rate at which water flows from the tank is constant. In this case, if the rate of water flowing into the tank is bigger than the drain rate, water will accumulate in the tank. We could say «excess water» accumulates in the tank.

It is our physiology knowledge what would lead, where appropriate, to talk about «caloric excess». From the First Law of Thermodynamics we cannot deduce a physiologic behavior, which is what the fraudulent energy balance theory does.

For example, the storage of carbohydrates as glycogen cannot be caused by an intake that exceeds their oxidation, because that would mean that by increasing our carbohydrate intake we could gain as much weight as we wanted. But physiology says it is not like that.

a chronic imbalance between carbohydrate intake and oxidation cannot be the basis of weight gain because storage capacity is limited and controlled, conversion to fat is an option which only occurs under extreme conditions in humans, and oxidation is increased to match intake (Broskey et al.)

In this model part of the contents of the tank is lost through the drain, but part is lost because it overflows the walls of the tank.

Please note that our body has physiologic mechanism that can dissipate unnecessary nutrients as heat. One of these mechanisms are the uncoupling proteins, which can be found in several organs and tissues in our body.

Let us assume that a specific substance is present in the water and it makes the tank expand. As a consequence of that expansion, the total volume of water stored in the tank increases. Would you say that, in this case, «when more water comes in than goes out, excess water accumulates in the tank«? No, this not correct. The use of the term «excess water» is unwarranted.

This model does not violate universal laws of physics —water is not magically created nor destroyed— and the existence of another model that is also compatible with the physics laws, but with a behaviour different from that of the energy balance theory, clearly shows that this theory goes beyond the physics constraint that the First Law of Thermodynamics establishes: it introduces an unwarranted physiologic behaviour. As I said before, the fraud of the energy balance pseudoscience does not lie in the maths but in the unwarranted physiologic behaviour that it makes up.

Obesity is not a problem of energy imbalance: it is a problem of excessive triglyceride accumulation in the adipose tissue. There is no physiologic basis for talking about “energy” or “energy excess” in regard to weight changes in the human body.