The graph below belongs to a 1998 article. It is a plot of how many people had a specific total cholesterol level. We can see separate data for people which developed coronary artery disease (CAD) at some point in the 26 follow-up years of the study, and people that didn’t (No CAD). 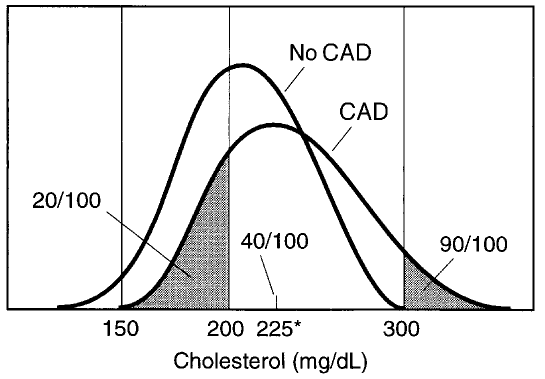 Forgetting about my doubts on the figure (which I detail at the end of this blog entry), the figure tells us that

For a specific total cholesterol level, if it belongs to the range between 150 and 300 mg/dL, we can’t say if that person has an elevated cardiovascular risk. In that range of values we find people with and without disease.

Let’s say your total cholesterol is 225 mg/dL, the most frequent value in people with CAD. For this specific value, according to the article’s author,  40% of people had CAD, and 60% of them hadn’t CAD. Prescribing a drug for people on that situation would result in 6 out of 10 people being medicated for no reason, with drugs, the so called statins, that have lots of negative side effects on the health for a big percentage of the users. The author of the article asked:

How do we determine which 40 of 100 people we see are at risk so that we do not treat people who do not need treatment?

And his answer was that more parameters needed to be considered (with special attention to the HDL).

Is cholesterol guilty of any charge?

Let’s assume the following hypothesis is true: for unknown reasons (diet, smoking, alcohol, etc.) our body suffers from «inflammation» (see) and that condition usually has the following consequences:

Under those assumptions people suffering from inflammation would have a higher cholesterol level, but reducing that levels would be treating a symptom not the underlying cause, inflammation, and the risk woultn’tdecrease. On the contrary, statins create a bunch of health problems. And don’t forget that studies where cholesterol was decreased with seed oils, mortality increased (see), a consequence of the pro-inflammatory effect of those fats? In other cases, decreasing cholesterol levels with drugs didn’t change the cardiovascular risk(see).

Decreasing your cholesterol with drugs may be as sensible as cutting off your head to decrease your risk of suffering from Alzheimer’s disease. It is true that we need a head to suffer from that disease, but that doesn’t imply that it is the culprit of having the disease.

But statins do decrease the cholesterol levels and reduce a little your cardiovascular risk, don’t they?

In a few cases, but it is also said that that improvement may be created by a side effect of those drugs: they are anti-inflammatory (see or see), but not because of the reduction of the cholesterol levels.

As a conclusion, if inflammation were the real culprit, we shouldn’t be worried about having 250 mg/dL of cholesterol, but about having inflammation. And instead of using drugs as dangerous as statins to change a symptom, we should be seeking other ways to decrease inflammation. Is there an «anti-inflammatory diet«?  How can we avoid having a B-pattern of LDL, with lots of small and dense particles, the ones that are dangerous if oxidized?

If you want to reduce the cardiovascular risk in diabetic patients: less carbs, not less fat…

We should reflect on the purpose of decreasing our cholesterol levels with drugs, because cholesterol is a substance needed by our body, and it is probably not the culprit of the cardiovascular disease, just an involved component. May be just as involved as our arteries, our heart or being alive in the progression of that disease.

There are a few things I don’t understand from the figure shown at the beginning of the article: