I read elsewhere that a meta-analysis of articles comparing low-carb diets to «balanced» diets did not find large differences in weight loss between those two diets. The study is «Low Carbohydrate versus Isoenergetic Balanced Diets for Reducing Weight and Cardiovascular Risk: A Systematic Review and Meta-Analysis«.

The first thing to note is that the compared diets are isocaloric or isoenergetic, a fact detrimental for the low-carbohydrate diets. And the unfavorable effect exists because low-carb diets are more satisfying, so they naturally help reduce caloric intake compared to other diets. By forcing an isoenergetic intake in the diets that advantage is lost.

Apart from that, using the term «balanced» seems pretty unscientific to me because this term means «a diet that contains adequate amounts of all the necessary nutrients required for healthy growth and activity«. Are low-carb diets not balanced?

Looking at Figure 3 of that study we see that despite being isoenergetic diets and against the (false) notion that the only thing that matters is the total caloric intake, diets low in carbohydrates always produce greater weight losses, except in two studies that are coincidentally from the same authors (with minor differences in the list of authors). If the total calories consumed in a diet, regardless of their origin, determine body weight changes, how is it possible that diets low in carbohydrates always cause more weight losses than isocaloric diets with more carbs? Simply because the idea that all calories are equal is false.

But there are two studies that are out of the norm. As we will see next, the data shown in Figure 3 presumably obtained from these studies are false.

According to the authors the compared diets are:

38% of 1507 calories is 573 calories, i.e. about 143 g of carbohydrates. That’s the diet they call «low carbohydrate», but that is not a low-carbohydrate diet. And even if the authors of the meta-analysis say it is, their results can not apply to people who follow real low-carb diets.

But in any case in this study (see figure below), after three months, those on diet I lost 3.4 kg, while those on diet II lost 4 kg. In the first case from 93.8 to 90.4 kg, and from 91.5 to 87.5 kg in diet II . The difference between these two high-carbohydrate diets is only 600 grams. But group I weighed 2.3 kg more at the baseline than the other group so the difference in the final weight is 2.9 kg.

However, in the meta-analysis the authors convert this difference of 600 g between two high-carbohydrate diets in 2.9 kg, because they make the nonsense of comparing the final weight ​​of the participants, regardless of the fact that one of the groups weighed significantly more than the other one at baseline.

In the second study of De Luis et al, 2012, the same two high-carbohydrate diets are compared:

But now the results are obtained for people with a particular variant of a gene (just read the title: Evaluation of weight loss and adipocytokines levels after two hypocaloric diets with different macronutrient distribution in obese subjects with rs9939609 gene variant), so the results can not be extrapolated to the general population. The second line of the abstract informs us that this variant has been associated with a high risk of obesity. 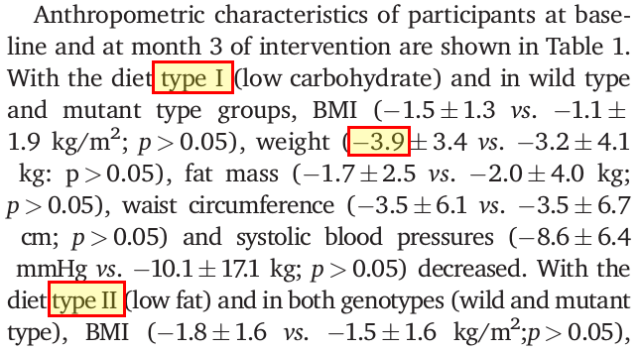 That is a difference of 800 g, which the authors of the meta-analysis convert to 3.4 kg in Figure 3 by using again the final weights of the two groups.

I have not analyzed the remaining articles included in Figure 3 of the meta-analysis.

Finally, in Figure 4 of the meta-analysis the results for studies of longer duration (1-2 years) are shown. In this case 4 articles show better results in weight reduction for «balanced» diets than low-carbohydrate diets. Among them I focused on a couple. First Sacks 2009, the most significant in the comparison. In the first page of the article we see that weight reduction in global terms was higher in diets with 35% carbohydrate, when compared with diets with 65% carbohydrates. A loss of 3.4 kg compared to 2.9 kg for 35% and 65%, respectively. 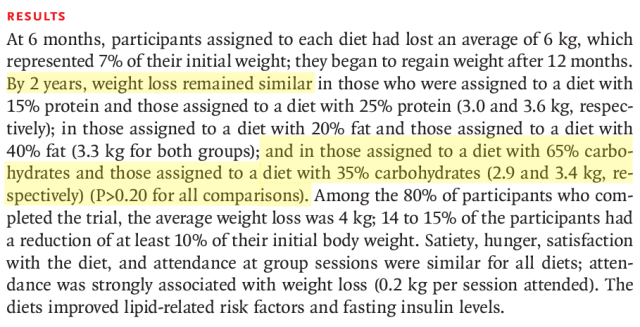 However, in the meta-analysis the numbers are placed in the wrong column: 2.9 is assigned to the low-carb diet and 3.4 to the «balanced»:

Out of curiosity I also looked at the Klemsdal 2010 study , a one year duration study in which the diet of the participants was monitored at 3 months and as you can see the low glycemic index diet (which is not the same as low carbohydrate) had about 37% of calories from carbohydrates. That’s not a low carbohydrate diet.

After 3 months from the start the low-glycemic diet was better than the «balanced» diet in terms of weight loss. Even at 6 months it was better:

But after the «third month check» they did NOT know what the subjects were eating. «A 7-day dietary questionnaire was obtained at 3 months.» And that’s it. Not only the diet was not a low-carb diet: we don’t even know if the subjects were following it. Since the diet was never a low-carb diet, I think it’s irrelevant to know to what extent the participants abandoned the diet.

The meta-analysis concludes that both approaches (low-carb and «balanced» diets) are equally valid for weight loss and for good health. What data really say is that when two diets high in carbs are compared, the one with slightly less carbs gets slightly better results. But I disagree that we should consider this meta-analysis to draw conclusions, because the data shown to us are false.